My soul trembled in empathy when reading Wendy Baez’s novel Catch a Dream. The main character traveled through the Land of Israel desperately seeking the elusive truth that lies at the intersection of culture, religion, and self.

The main character’s search for spiritual sanctuary in the land of milk and honey echoes an ancient story I prayed about every Saturday. As I grew older, I discovered that across the globe, billions of people look for guidance from a a man who walked in this same land.

Despite all these reasons to be curious, I had never pictured myself wandering through contemporary Israel. After I read Catch a Dream, I can’t get that image out of my mind. 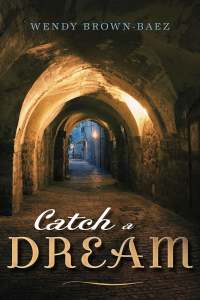 How did Wendy Baez create such a moving story about a woman traveling with her ten year old son, penniless, looking for handouts like a modern version of an ancient pilgrim? It sounds like the fever dream of a novelist driven to invent an extreme plot that would provide the backdrop for a modern Biblical story.

But it wasn’t a fantasy. The author really went on such a trip with her son. For many months, she tried to find herself reflected in the eyes and hearts and even the history of the people of Israel. She kept copious notes about her soulful experience, hoping to someday turn them into a book.

Despite years trying to transform her experience into a memoir, she couldn’t figure out how to construct a good story from her actual tricky detours and complex subplots. Finally, she decided to write it as fiction. That decision freed her to modify it to suit her storytelling needs.

The authenticity and psychological power of her main character arises straight from the author’s journals. By calling it fiction she could distance herself from the constraints of truth and zero in on the dramatic urgency. The book grew strong and deep when nourished by the influences of both fiction and memoir.

By reading and analyzing a number of fiction authors who turn to real life for characters and situations, (see notes) I learned how memoirs and novels differ in more ways than just fact versus fake. The two genres of writing invite different story arcs.

A fiction reader might expect this novel to end with the main character marrying and settling down. But Wendy Baez’s actual journey ended on a more ambiguous note. That’s where Catch a Dream blurs the line between the two forms. Instead of ending the novel with a fantasy ending, she allows the character to sound like a real person, with deep ambiguous needs.

Because the authenticity of the character arises from Wendy Baez’s own emotional complexity, her supposedly fictional novel took me on one of the most authentic searches for self I have ever read.

In addition to a search for self, Catch a Dream was a great story about Israeli identity, about ex-pat life, an awesome ode to the character’s best friend, an unbelievably conflicted love relationship, and a “love letter to Israel.” Each of these themes offered a good reason to read the book.

Reading memoirs and writing my own has sensitized me to the psychological journey of being a human being. For example, the psychological trials of being a parent, of being addicted to drugs, of losing a loved one, etc. Among the many aspects of being human that I have learned from reading stories, is the challenge of become an adult. Catch a Dream takes me on a fascinating, unique ride through that critical stage.

When any young person attempts to leave the nest and launch into the wider world, they must accept certain assumptions about what it means to be an adult. For example, they need to earn a living, find a relationship, start a family, and so on. Not every young person easily accepts these conditions. I have read some fascinating memoirs by people who, make mistakes or drag their feet while trying to transition from child to adult.

The most familiar impediment to becoming an adult is drug addiction. For example in Tim Elhaj’s memoir Dope Fiend, heroin addiction spoils his initial opportunity to step out into the world, and so he must reinvent himself in order to reach the next step. Dani Shapiro in Slow Motion  does the same thing with sex and cocaine. Both are excellent books by writers who spent many years “finding themselves” through writing.

In addition to drugs, another, more abstract, disruption often turns up in memoirs. A young person’s search for truth can provide a wall of confusion and pain, as it did for a number of authors.

For example, in his memoir Ashes in the Ocean  Sebastian Slovin had to make sense of his father’s suicide. In An Incredible Talent for Existing, Pamela Jane  needed to find herself amid the collective mental breakdown known as the 60s.

In the memoir New York Regional Mormon Singles Halloween Dance, Elna Baker  struggled throughout her launching to decide whether to stick with the celibacy regulations taught by her Mormon roots, or to leave those rules and enter the ones offered by the dating game in New York City.

In the memoir, An Unquenchable Thirst, Mary Johnson,  refused to accept the social rules of marriage and family offered by her middle class upbringing. Instead, she made the radical decision to throw away conventions and join Mother Teresa’s religious order.

In my own memoir Thinking My Way to the End of the World  my own upbringing and tendencies as a scientist and philosopher sounded good in theory, but as I tried to grow up in the sixties, my abstract ideas ran headlong into the complexity of real life.

Wendy Baez’s novel Catch a Dream is a perfect example of a launching story about a woman desperate for clarity about her relationship to spirituality and religion. To find herself, she joined a religious group (this took place outside the scope of her novel). Then she went out on her own, trying to find her own spiritual and religious homeland. She seemed obsessed by the thought: If Christ was here, shouldn’t I be too?

Her novel enriched me along each of these lines. And as if that wasn’t enough, her exemplary stylistic choices and talent made the novel an absolute pleasure to read. Some of her “riffs” or mental “soliloquys” are so passionate and clearly written, they seem like music.

To learn more, about her creative choices I interviewed Wendy Baez. Her comments offered lovely insights into the relationship between memoir and fiction. I’ll post that interview next week.

Click here to read my article about a book of short stories The Inheritance of Exile: Stories from South Philly by Palestinian/American author Susan Muaddi Darraj

Click here to read my article about Xujun Eberlein’s book of short stories, Apologies Forthcoming about growing up during the Chinese Cultural Revolution.