Whenever a new wave of immigrants arrives in the United States, they and their kids must find their identity somewhere in the space between their old country and their new one. It’s an age-old process, and one which my own immigrant grandparents and parents had to undergo.

Growing up in a household in which my parents still spoke their parents’ mother tongue, Yiddish, I had plenty of opportunity to observe the effects of growing up in the melting pot. Over time, I came to understand a peculiar thing about the struggle every immigrant must face. For four hundred years, immigrants have been trying to find their new culture by stripping away their old one.

So does that make us a nation of 100 cultures, or none at all? It is the question implied every time we try to sort out our own heritage, or wonder about a new neighbor or coworker with a different accent.

Understanding how this Melting Pot works could be the subject of an advanced degree in Cultural Anthropology. But thanks to the Memoir Revolution, all of us have easy access to a charming tool that entertains while it educates. We can all become amateur cultural anthropologists by reading memoirs. Memoirs take us through the entire process of blending as seen through the eyes of a variety of participants.

Take for example, Albert Nasib Badre. His memoir Looking West describes his move from Beirut, Lebanon to the United States. As a boy in Beirut, he venerated all things American. And so, when his professor father said they were moving to the United States, the little boy was ecstatic. 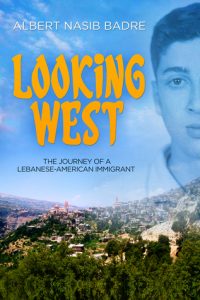 Perhaps his fearlessness about blending was helped by his own family folk lore. According to legend, his Middle Eastern ancestors acquired their blue eyes from crusaders who swept through Lebanon almost a thousand years earlier.

Despite his enthusiasm for blending, he had to undergo many of the difficult tasks that all immigrants must face when trying to find themselves in their host country. Probably the hardest thing about moving to the new country for Badre was losing his close knit set of friends and extended family. Badre grew up in Beirut before the civil war tore the city apart. As a child he walked out of his home, and could visit or greet cousins and friends. His community connections were so deep and rich, they make American social interactions look more like the wild west than a civilized country. When he arrived here, his social relations fell to a tiny fraction of what they had been.

Badre’s memoir does not dwell on the difficulties of immigration though. He dives into the complex task of growing up and becoming an individual in a society which prizes self-determination.

The search for a suitable career.

One of the requirements for growing up is to figure out what you are going to do for a living. For some of us, this search for a calling can feel mundane, and not contain much interesting dramatic tension. For others, the search can be so sublime it could fill a whole book. Badre’s search is closer to the latter. His search for a career was propelled by a combination of serendipity, mentoring, trial and error, and a deep desire to serve higher principles.

Despite his father’s relentless advice to be practical, he continued to pursue idealistic educational goals. Those were the days of a true liberal arts education and so, he followed his heart, studying mostly theology and philosophy.

When it came time to earn a paycheck, though, his father’s advice made more sense. After a failed attempt to become a social worker, he went back to school and ended up with one of the most sophisticated careers available. In the early days of computer technology, he latched on to the emerging field of human-computer interaction, and became a leading expert in the field.

His journey to find a mate was also intricate and exquisitely told, complete with old fashioned courtship, failed attempts, and impulsive choices. And his attempt to sort out his preference for Protestantism versus Catholicism reads like a theological thriller.

I can’t think of another memoir that so deeply engages me in the author’s search for intellectual, theological, and career self-development. He set out as a child absolutely determined to live in an integrated way, true to his own beliefs. And through the course of his story, he succeeded.

Al Badre’s story, like all memoirs, is a blend of the universal and the particular. It has the familiar elements of a boy struggling to come of age, trying to figure out a mate, a job, and a belief system.

He seems to have been born for the challenge of finding himself. In a complex dance between old customs and new, he looks to his parents for guidance about finding his career, his marriage, and even his belief system. Then in a gesture toward the independence of his adopted country, he takes their advice into account and then sets out to find his own truths.

Using the essence of American Independence and seeing the Melting Pot as the ultimate license to explore the best version of himself, he selects from the vast menu of choices, tries out more than most of us have the patience to explore, and then gradually through hard effort, becoming a self-actualized citizen of modern times.

Early in the 2000s, when I became interested in writing my own memoir, I realized that I needed to read a few. That simple intention quickly expanded, once I realized that reading memoirs is a window into the souls of my fellow travelers.

Over the years, I have accompanied many people, sometimes through hell, and always up mountains, attempting to climb to higher versions of themselves. In every case, when the hero achieved the mission, the resulting satisfaction transcended the ordinary circumstances of life. What started as a project to make sense of myself has led me increasingly into a deeper understanding of the people around me. Memoirs offer a combined education in sociology, psychology, anthropology, feminism, and even spirituality.

Al Badre’s story describes far more than one man’s move from Beirut to the United States. The memoir represents a new way for all of us to find the best in ourselves and to see the best in each other.

By reading such stories, we come to understand that the guy or gal with a different accent, skin color, or religion has a thought process, grows through life stages, worries about couples and kids and copes with losses just like us. And as each of us tries to make sense of differences, we are also on a quest to understand what we share.

The Memoir Revolution lets us join together to become better citizens of modernity, and also to extend a welcoming hand to those who are ready to join us in the brave world of modern, blended culture.

Other memoirs of blending cultures

Carlos Eire’s move to the United States was far more problematic than Al Badre’s. In Eire’s first memoir Waiting for Snow in Havana, he grew up privileged and wealthy in Cuba, with a Spanish ancestry that put his family in a ruling class. But to escape Castro, Carlos was shipped to the United States. Without money or even parents, Eire’s second memoir Learning to Die in Miami, portrays the hardships of life in the new country.

An even more radical example is Ayaan Hirsi Ali. She moved to the melting pot in Europe from her tribal culture of Somalia, where it is still considered normal to arrange marriages for teenage girls and to perform female genital mutilation.

Ayaan Hirsi Alli in her memoir Infidel at first looked at Western Culture as a safe haven to escape from the harsh treatment of women in her native land. Gradually she grew to respect, and then to embrace, and then to love Western culture. She sought an education in political science and became outspoken advocate for the modernization of her former homeland. Her memoir is a fascinating look at Western culture as seen through an African Muslim lens.

A light-hearted ride through the Melting Pot is provided by the Iranian American author Firoozeh Dumas’ memoir Funny in Farsi, about growing up in a family who had emigrated from Iran and had to find their new blended identity in California.

The memoir Freedom Writers Diary is about a class of high school students trying to identify themselves in warring tribes based on their ethnic origins. Through literature and journaling, teacher Erin Gruwell showed them how to see themselves not as “the Other” but as equals. By the end,, they were able to shed their sense of separateness and danger. It is the perfect Melting Pot story.