A young man in the 60s went off to the jungles of Southeast Asia, not to face enemies with machine guns but to confront that transition all of us must face – the voyage from childhood to adult.

As Neill McKee fulfilled his mission for the CUSO, the Canadian version of the Peace Corps, he had to teach the local school kids. On weekends he traveled with his buddy Peter, to immerse himself in the nature and culture of the region.

In his memoir, Finding Myself in Borneo, McKee generously offers a front row seat to his adventure in an interesting part of the world. But I want more from a memoir than 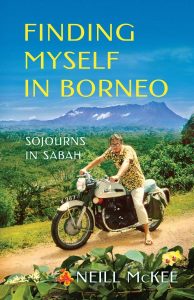 just exotic sights. I expect to learn about the author’s inner journey as well. McKee’s memoir satisfies that desire by showing me how his adventure in Borneo helped him launch from child to adult.

The Memoir Revolution has provided a literary genre through which we can explore this fascinating life transition. By reading memoirs like Neill McKee’s, we discover the infinite variety of ways people acquire the prerequisites of adulthood, such as finding a relationship, a way to earn a living, a set of beliefs, and a place to call home.

In addition to the usual hassles of growing up, Neill McKee adds another dimension. He complicates everything by going forth into a foreign land. And yet, his impulse to leave home has a remarkably familiar ring. Traveling in order to find one’s deeper truths is at the heart of Joseph Campbell’s universal myth, the Hero’s Journey.

In Homer’s Odyssey, one of the earliest and most famous stories in Western civilization,  Ulysses traveled around the Mediterranean in an attempt to find his true home. Unlike the Odyssey, McKee’s journey does not involve magic and monsters. But the young man was so smitten with epic heroes that he decided the island of Borneo was the model for Mordor, the land of evil in JRR Tolkien’s The Lord of the Rings.

Even though he saw himself in the land of Mordor, McKee was not on a quest to defeat evil. His mission was to travel beyond his own youthful impulses and mature into adult life.

Another author finds herself through foreign service
Another memoir demonstrates that traveling to search for a wiser version of yourself can continue in later life. When Janet Givens crossed the threshold from the first half century to the second, she and her husband joined the Peace Corps. They were looking to energize their entry into this new chapter of their lives. 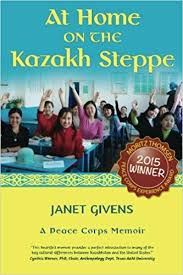 The caricature of midlife crisis is a middle-aged guy in a red convertible sports car having an affair. Memoirs transcend caricatures. Instead they describe unique characters who question the trajectory of their lives and look for creative ways to re-calibrate.

In her memoir At Home on the Kazakh Steppe, Janet Givens turns to foreign service as the tool with which to reinvent herself. Following in the footsteps of classic heroes, she trades her comfortable home in the US for a tiny room among people, most of whom speak a language she couldn’t understand.

I recommend the book for anyone who wants to vicariously experience a courageous search for purpose. Read it if you have ever considered self-sacrifice and volunteerism in later life. As a bonus, you will gain a first hand glimpse into an obscure corner of the former Soviet Empire,

If you have ever traveled to, or lived in an exotic location, one obvious way to entertain readers is to show them the sights. However, memoir readers want to know about the psychological dimensions of the hero’s inner world. So be prepared to show them how your exotic outer world changed you forever.

Whether you were invited into a parlor for a ritual cup of tea, or tried to bargain with a local vendor, or any of a thousand other small glimpses into every day life, your memoir provides a feel for the psychological and social dynamics of a place. You become homegrown, amateur version of a cultural anthropologist.

Writing exercise
During your transition from an earlier version of yourself to the present one, did you find some of your truths in faraway lands? If so, write a scene that intrigued you, disrupted some preconception, showed you new sides of yourself, or in some other way altered your beliefs about your identity and your place in the world.

Hero’s Journey: reporting the adventure to those who didn’t go

In the universal myth of the Hero’s Journey, the main character goes out into the land of the adventure, grows through hardship and longing, and finally achieves a goal. Ignorance is replaced by wisdom. Anger by forgiveness. Confusion by clear vision.

But even after scaling the moral mountain, the story is not complete until the hero returns home to teach these lessons to the community.

The effort to bring wisdom back to the community is exquisitely illustrated by both Neill McKee in Finding Myself in Borneo and by Janet Givens in At Home on the Kazakh Steppe. Both the Peace Corps, and its Canadian cousin, the CUSO, encourage participants to return after their service to share insights with fellow country men and women.

Both McKee and Givens took this part of their assignment seriously, logging in the many hours required to compose a memoir. By letting us vicariously accompany them, the authors give all of us the opportunity to see ourselves in intimate connection with the Other, thus providing us with an ever deeper empathy for the global citizenship of planet earth.

When Firoozeh Dumas in Funny in Farsi, or Carlos Eire in Learning to Die in Miami immigrated to the United States, they had to adjust to culture in this country as a foreign land. Their “foreign travel” memoirs provide an eye-opening perspective on the hall of mirrors that is created when one looks at one’s self as the Other.

The “foreign land” doesn’t really even require crossing national borders. For example, when I left my ethnic neighborhood in Philadelphia to go to college in Wisconsin, to my naive eyes the Midwest was strange and bewildering. Then while I was still struggling to adapt to one shift in reality, the  60s counter-culture erupted, transforming an already bewildering coming of age experience into a psychedelic one. Thinking my Way to the End of the World by Jerry Waxler

Writing prompt
Write a scene about stumbling into some patch of culture out of your ordinary experience that forced you to find new attitudes, or different parts of yourself.

Memoirs mentioned in this article
At Home on the Kazakh Steppe, a peace corps memoir by Janet Givens
Finding myself in Borneo by Neill McKee
Funny in Farsi by Firoozeh Dumas
Learning to Die in Miami by Carlos Eire
Thinking my Way to the End of the World by Jerry Waxler

Funny in Farsi by Firoozeh Dumas

Notes
For brief descriptions and links to other posts on Memory Writers Network, click here.