(This is the second article about Victoria Twead’s memoirs. For the first, click here.)

Despite my enjoyment of Victoria Twead’s memoir, Chickens, Mules, and Two Old Fools, something didn’t seem right. When the couple moved from dreary England to a 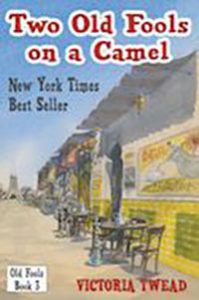 fixer-upper in sunny Spain, instead of hating the hardship they laughed. I worried that their frivolous attitude missed the opportunity to make some serious points.

To learn more about this adventuresome couple, I read another of their memoirs. In Two Old Fools on a Camel they moved from their by-now cozy village in Spain to a concrete building in the desert of Bahrain. In their new, barren surroundings, they were to teach kids of edgy, rich parents. They did this to earn money. That’s a scary twist. What happened to the golden years when you could retire to a life of leisure? To add to the discomfort, during their visit, a political uprising briefly shut down the country.

After considering both memoirs, my worry about their serious purpose began to evaporate. I could see that underneath the humor was a willingness to go out on demanding adventures. Their fearless attitude fits perfectly with my understanding of the Hero’s Journey.

I first learned about the mythical basis for modern storytelling from Chris Vogler’s book, Writer’s Journey: Mythic Structure for Writers. Once I recognized the universality of the Hero’s Journey, it was easy to see its fingerprints all over my favorite memoirs. (I go into more details of this idea in my book Memoir Revolution.

The Tweads, like so many memoir authors, follow the Hero’s Journey model closely, going forth into the land of adventure. In their case, first into Spain and then into Bahrain. Unlike mythical characters, the heroes of memoirs search for psychological achievements. For the Tweads, the quest was for dignity in midlife. And like heroes in myths, the Tweads were willing to accept major discomfort during their pursuit.

In fiction, our heroes usually deal with discomfort by ignoring it. For example, in John Wayne’s war and western movies, the actor was famous for appearing to simply not care about extraordinary discomfort. In real life, though, the rest of us need to develop coping methods.

This is where the Tweads took me into new territory. They used humor, and even went so far as to pull practical jokes. For example, teaming up with fellow teachers, one of them dressed up in an outlandish costume, and then hid. When an unsuspecting victim entered the room, the trickster jumped out, trying to scare the daylights out of the newcomer.

After reading hundreds of memoirs, I can’t think of another one in which the hero uses practical jokes to break the tension. (See note below) At first, I feared the zaniness of their approach reduced the gravitas of their serious work. Aren’t practical jokes for children? Aren’t we supposed to outgrow that impulse?

My misgivings evaporated after reading a scholarly book on the subject. Trickster Makes this World: Mischief, Myth, and Art by Lewis Hyde. Hyde’s book shows how pranksters form an important theme in mythology. Because the Trickster messes around with the values of society, Western civilization has spent centuries trying to suppress this impulse. Despite this effort to stamp out the Trickster, he or she routinely appears in mainstream culture. First of course, are the practical jokes of children. In adult life we see the Trickster alive and well in horror movies, Halloween customs, and slapstick comedy. Victoria Twead’s use of pranks to survive adventure offers a refreshing, upbeat spin on this fundamental notion of trickery and surprise.

Heroes Return to the Community

The final stage of the mythical Hero’s Journey involves the hero’s return to the community to share hard-earned lessons. This is in fact the task of every memoir writer. Each of us invites readers to learn from our experience. Victoria Twead does this as well, and like everything else she does, she goes the extra mile.

In addition to passing her messages to us by writing many books , Victoria Twead shares herself on the Facebook group she co-founded with Alan Parks, (see note)    .

It was in that group that I discovered yet another dimension of Victoria Twead’s commitment to humor. In the Facebook group, she sets a light tone, asking members to leave their serious intentions at the door, before entering. Through these policies, the Facebook group attempts to bring a “party atmosphere” to the internet.

The levity on the Facebook group confused me in a similar way to the levity in the memoirs. “It’s too light,” I worried. “Where are the intense discussions about the meaning of life?” Finally, I accepted that group members have been invited to this gathering, not to ponder but to party.

The Facebook group is devoted to celebrating the joy that memoirs bring to writers and readers. I learned quite a bit about celebration during the sixties, when, in the pauses between anti-war demonstrations, we often got together for parties. Fifty years later, Victoria Twead and her cohorts on We Love Memoirs apply the notion of celebration to the internet.

It turns out that partiers, like tricksters, have roots that extend to the very beginnings of human culture. In the book Dancing in the Streets: A History of Collective Joy (see link below), social historian Barbara Ehrenreich traces celebration from the free-wheeling hoopla of pagan rituals. Similar to the way Western civilization tried to suppress the Trickster, there was a centuries-long effort to stamp out public celebration. In modern times, public revelry has been corralled into special holidays, such as New Year’s Eve and Mardi Gras. Perhaps, if Ehrenreich is watching, she might add a chapter in her book on celebration to include We Love Memoirs, and other internet attempts at partying.

After thinking about the Twead’s memoirs, I’ve discovered plenty of serious lessons. They harnessed the myth of the Hero to charge into life with full vigor. They used the myth of the Trickster to help them survive the discomforts of their adventures. And after they returned they used the ancient system of Story to share their adventures with us “couch warriors.” Finally, they gathered us together on the internet to for public revelry.
Even the Two Fools in the titles of their memoirs raise a serious issue. In ordinary usage, the word “fool” is a put down, but I don’t see the Tweads that way. I think they are more like Shakespearean fools. In Shakespeare’s plays, while most of the characters were caught up in the drama of the moment, the Fool was the one who lightly danced on top of reality and revealed the truth.

If Victoria Twead and her husband are Fools, maybe we would be smart to follow in their footsteps.

The memoir How to Lose Friends and Alienate People by Toby Young was laugh-out-loud funny too. In the memoir, he attempted to earn his way into fame, and was willing to be outrageous in order to get into the public eye. But throughout the book, his zany behavior was driven by a serious needs. He occasionally dove into situations that came close to tragic, such as commitment to his relationship, his misgivings about fatherhood and his struggle with alcoholism. Read my 2007 review of that book by clicking here,

Dancing in the Streets: A History of Collective Joy byBarbara Ehrenreich

2 thoughts on “Two Fools at a Party: Serious Side of Humor”