In the memoir Ashes in the Ocean, Sebastian Slovin must find his own identity beneath the shadow of his father’s suicide.

At first, the dramatic tension results from the reader’s empathy for a boy who suffers the ultimate abandonment and betrayal. Over the course of the book, the tension increases because the boy fears he is doomed to repeat his father’s self-destructive pattern.

This fear sends him on an urgent chase to dig deeper into his father’s mind and then into his own. The book becomes a race with the clock. Will he find his truth before surrendering to the mad impulse to destroy himself? 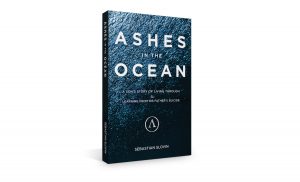 At first he runs faster and faster. Ironically, his manic attempt to stay out in front of the fear unwittingly recreates his father’s own desperate need to win. To his father, coming in second place is a humiliating defeat, and Sebastian follows in his footsteps.

To save himself, Sebastian needs to back off. But emotionally, he seems incapable of going slower. He becomes famous (in certain circles) as a world class bodyboarder, (I didn’t even know there was such a thing). Then a yoga teacher. And most desperate of all, he seeks the goodness within himself in order to defeat the terrible fear of following his father into suicide.

Many memoirs lead readers through the challenge of finding one’s own identity. Other memoirs require healing from a loss. Ashes in the Ocean combines these two psychological goals. In order to clarify his own identity, the author must make peace with his father’s life and death.

Sebastian anxiously interviews his father’s old friends, digs up old newspaper articles and letters. However, when emotional wounds cut this deep there is the danger that knowledge and research will only lead to an intellectual understanding, adding more dramatic tension to the search and resulting in a “dark night of the soul” resolution that allows these lessons to penetrate all the way to his heart.

The implied meta-lesson of every memoir is the hope that the reader might be able to grow by sharing the author’s experience. In the epilog, Sebastian Slovin explicitly states his hope. He says:

“While everyone will have their own path on this journey, it’s important to remember we are not alone. Many of us have been affected, whether personally or through a friend or loved one, by mental illness and/or suicide. There is a part for all of us to play in working to raise awareness and to overcome the stigma around suicide and mental illness. My hope is that this book serves as an inspiration to others to share the stories that need to be shared and to listen deeply to the stories that need to be heard.”

This is the essence of the Memoir Revolution. Through sharing our stories, we are normalizing the hard work of our inner journeys and giving others the tools to share their own.

What mystery about your father (or mother) nags at you and makes you wonder how it affects some of your own quest to find yourself?

How did this mystery (answers or lack of them) influence your self-image while you were trying to find your own identity?

Your unique story has universal aspects

This deep need to make sense of one’s father (or one’s mother) in order to understand one’s self shows up again and again in memoirs.

Chasing the Hawk: Looking for my Father, Finding Myself by Andrew Sheehan
Tender Bar by J.R. Moehringer
Drama by John Lithgow  A famous actor traces the roots of his career back to his father’s influence.
Dreams from my Father: A story about race and inheritance by Barack Obama
Thrumpton Hall: A Memoir of Life in My Father’s House by Miranda Seymour

In the Shadow of Fame by Sue Erikson Bloland. Daughter of the famous psychologist, Erik Erikson saw him as a narcissist and a woefully inadequate father, in the grip of his own public image.

Reading my Father by Alexandra Styron, William Styron’s daughter,
The daughter of the great author trying to dig into his personal archives to get to know him better than in his impersonal presence.

Who is my mother is also at the heart of many memoirs.

One of the best is James McBride’s Color of Water: A Black Man’s Tribute to his White Mother, trying to make sense of his Jewish mother who would never permit anyone in her black family to acknowledge she was white.

Three more words by Ashley Rhodes-Courter
An adopted woman trying to approach and make peace with her biological mother.

She’s Not Herself: A psychotherapist’s journey into and beyond her mother’s mental illness by Linda Appleman Shapiro

The House at Sugar Beach: In Search of a Lost African Childhood by Helene Cooper

Mistress’s Daughter by AM Homes
Alex’s Wake: The Tragic Voyage of the St. Louis to Flee Nazi Germany—and a Grandson’s Journey of Love and Remembrance by Martin Goldsmith

4 thoughts on “Memoirs that ask who is my father?”