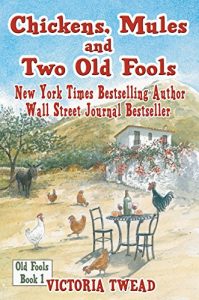 When I was growing up in the 1960s, “midlife crisis” conjured the image of a fifty-year-old guy driving a red convertible sports car accompanied by a giddy twenty-year-old blond. Thanks to the Memoir Revolution, we no longer rely on such clichés. Instead, we can read detailed accounts of the infinitely varied experience of real people.

Take for example, the midlife journey depicted in Victoria Twead’s “Old Fools” memoir series. (The fools in her self-effacing titles refer to the author and her husband.)

In the first memoir of the series, Chickens, Mules, and Two Old Fools, when Victoria Twead reached midlife, she was itching for a change from dreary English winters. She convinced her husband that they should buy a fixer-upper in a village in southeast Spain. He agreed to a five-year trial. If they still loved it by the end of that period, they would stay. With the clock ticking, they began the laborious project of turning a dilapidated house into a cozy home.

By most measures, that achievement would have been sufficient to declare their approach to midlife a smashing success. But for Victoria Twead it was only the beginning. The next mountain she wanted to climb was a literary one. She wrote a memoir about their move to Spain. Her good-humored writing brightened the dark spots, turning the whole messy experience into Chickens, Mules, and Two Old Fools.

Their not-so-foolish decision to move to Spain followed by the even less foolish effort to write about it were merely the first couple of steps in what I have come to see as Victoria Twead’s ferocious response to midlife. Following Dylan Thomas exhortation, she was not going gentle into that good night.

But then life in Spain hit a bump more serious than outmoded plumbing and collapsing walls. Their money began to run out. Instead of retreating, they blasted out of their comfort zone into yet another adventure, taking jobs as visiting teachers in the small middle-eastern country of Bahrain. After that crazy year, she had enough material for her next memoir, Two Old Fools on a Camel. (I’ll talk more about it in my next article.)

By this time, the reading public had discovered her books, and in a wonderful example of “art meets life” the income from her memoirs began to sustain her lifestyle.

As if this wasn’t enough to confirm Victoria’s qualification as a ferocious midlife conqueror, she had another mountain to climb. In order to share her books, she forged a relationship with fellow ex-pat Alan Parks, and established a Facebook group called We Love Memoirs.  The group attracts people from all over the world. And unlike other such groups on the internet, the moderators keep this one buzzing. That’s amazing. Isn’t the internet supposed to belong to the young? (I’ll say more about the group in my next article, also.)

Victoria Twead’s relentless climb to higher versions of herself represents an important change in our culture’s view of midlife. Formerly considered the beginning of the end, many of us view the period as the beginning of the next interesting chapter. For a more serious exploration of this trend, read Marc Freedman, MD’s book The Big Shift: Navigating the New Stage Beyond Midlife.  In it, Freedman points out that naturally, with our increased life spans, we are going to search for the next great adventure.

This big shift in our thinking about midlife happens to coincide with that time in my own life. Once my age approached a half a century, it raised the possibility that my life was half over. Like Twead, I too wondered how to climb higher rather than sink lower. During my research into that question, I discovered that memoirs are the key, for me and many others in this situation.

For memoir writers, a crucial step for revising life’s timeline is to become the author of one’s own book. By using the ancient template of Story to help make sense of the whole journey, we have discovered a roadmap that lets us know where we’ve been and helps us figure out where we’re going. (I’ve documented the use of Story to help us understand ourselves and each other in my book Memoir Revolution A Social Shift that Uses Your Story to Heal, Connect, and Inspire )

Victoria Twead offers a great example of the trend to see midlife as a time to grow. If you decide to follow in her footsteps, to boldly seize the future, to overcome your own limits, and grow toward a better version of yourself, keep in mind all three dimensions of her approach.

First, if you lust for experience, go ahead and bust through your limits. Move to another country or achieve some other difficult or seemingly impossible dream.

Second, whether or not you are inclined to a new round of adventures, turn to memoir writing to explore and share the experiences you’ve already had.

And third, hop onto social media to create and join online communities and “party” with like-minded people from all over the world.

I’ll say more about Victoria Twead’s approach to midlife, to memoirs and to community in my next article.

Other memoirs about renewal at midlife
At Home on the Kazakh Steppe by Janet Givens. She and her husband joined the Peace Corps at around 50 years old.

Accidental Lessons: A Memoir of a Rookie Teacher and a Life Renewed
David W. Berner quit his job as a radio newscaster and became a school teacher

The Big Shift: Navigating the New Stage Beyond Midlife by Marc Freedman,