I feel fortunate to be able to extend my vision into the farthest reaches of human experience. This superpower has been granted to me by a lucky stroke of cultural creativity. I happen to live in an era when tens of thousands of creative people are looking back across the vast sweep of their lives, and turning those experiences into stories.

Take for example my friend Sandy Hanna. Over the years I’ve known her, she intimated that she lived in Saigon when she was a child. Her claim hung in the air, so far past the scope of my experience, I had no ability to visualize it.

Thanks to the cultural trend to read and write memoirs, Hanna took it upon herself to resurrect those memories from long ago. Her memoir Ignorance of Bliss brings that the period alive in my imagination. A ten year old blond girl trying to make her mark in the black market in Saigon informs one of the most exotic Coming of Age stories I’ve read. By writing the story, she offers her life in order to enrich mine.

It turns out the book represents a microculture – that is, that collection of oldsters who spent a portion of their childhood in Southeast Asia at the dawn of the conflagration.

Writing Prompt: What microculture would your memoir exist in?

Out of that collection of people, I discovered another author, Les Arbuckle, who like Hanna felt compelled to tell the story of his childhood in that war torn country. His book is called Saigon Kids, An American Military Brat Comes of Age in 1960’s Vietnam. 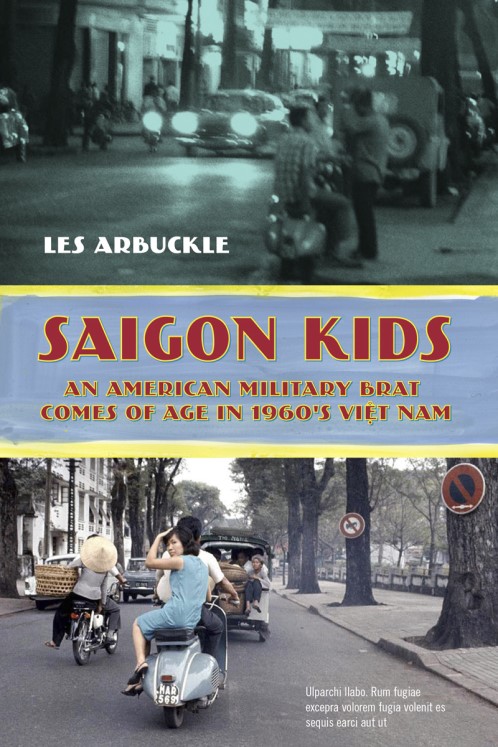 Anytime I can compare two memoirs that touch similar themes, or whose stories intertwine, I learn so much about the content and art of memoir writing.

In some ways, Saigon Kids by Les Arbuckle and Ignorance of Bliss by Sandy Hanna appear almost identical. For example, both kids were able to take advantage of their parents’ lack of understanding of the permissiveness of the society, allowing each of them to find astonishing gaps in parental control. Their freedom provides a shocking prelude to the incredible chaos which would soon envelope that country.

Despite the similarities between the two stories, they were also totally different, representing a stark contrast between the kinds of trouble a ten year old female and a fourteen year old male might get into.

With these rich weaving of differences and similarities, the two books combine to create an education in the experience of military brat kids, navigating pre-war Saigon, with their gender-appropriate world views.

In a previous post, I dug deeper into Sandy Hanna’s story. In this and the next post I’ll go deeper into Les Arbuckle’s.

Saigon Kids by Les Arbuckle is a great example of the raw adolescent male Coming of Age memoir. Following in the footsteps of the classic bestsellers, This Boy’s Life by Tobias Wolff, and Angela’s Ashes by Frank McCourt, it reveals the flaws and edgy mistakes that adolescent boys make on their way to becoming young men.

Neither Les Arbuckle or Sandy Hanna make any effort to hide their willingness to take the low road, at a time in their lives when experimentation preceded wisdom.

Learning that authors are willing to admit the dark side of adolescent experiences was an early milestone in my own evolution as a memoir writer. When I saw Tobias Wolff reveal his misadventures in This Boys Life, I thought “oh, so it’s okay to be flawed in a memoir.” Apparently Les Arbuckle learned the same lesson, because he was exceptionally brutal with his own self-image. I asked him how he arrived at such an honest approach to some of his less savory behavior.

Me: I was impressed at how raunchy and raw you made yourself appear in the memoir. Weren’t you afraid your kids or people who know you as an adult would think less of you?

Les: I did have a certain amount of concern about how some of my adventures and misbehaving might be perceived, but after reading a lot of memoirs I decided that it’s okay if some people get offended by an experience I wrote about. I was most concerned about how my fellow Saigon Kids would feel, but they seemed to like the book a lot. I think a memoirist, to be relevant, has to put their real self on the page and not sugar-coat or downplay the truth of who they were at the time. No one puts everything they ever did wrong on the page, but you have to tell at least some of the bad, as much as it might hurt. Getting to the emotional truth of a situation is difficult, but it makes things believable and shows that the writer is a human being, like everyone else.

Writing is, in many ways, like playing jazz: No matter how good you play, someone’s not going to like it, and no matter how bad you play, someone will like it. In any artistic endeavor there is always the fear of rejection and criticism, but you just have to say what you say and let the chips fall where they may. Fear is the enemy of all Art.

Me: Like me, you didn’t start out as a memoir writer. You had to learn as you went. What was that like for you to go from being a musician to writing and publishing a whole memoir?

Les: What I liked about beginning to write at such a late age is that one doesn’t need the kind of background that’s required, for instance, to learn to play a musical instrument well, or the level of education/math required to dabble in sciences such as computer engineering, or medicine. Trigger reflexes are not necessary for writing (like they are in playing music at a high level) and the conventions and rules of good writing can be absorbed by most people at almost any age. There are a great many good books on the subject.

Writing gave me the opportunity to create my own world, (or re-create, as in my memoir) and live in that world a little each day. As a life-long musician, it was interesting to delve into the creative aspects of writing and experience something that, had I tried my hand much sooner, could have been a career. Like music, Journalism is a problem-filled career choice, but almost anything worth doing is difficult in one way or another.

Although the “literary life” can be a lonely endeavor, participating in Writing Groups allowed me to improve my writing while developing social contacts I still maintain. My writing pals were (are) of all ages and walks of life, and helped give me a perspective about my stories that I could have gotten no other way.

Me: Thanks Les. I’m so glad you arrived at the craft. Thanks to your willingness to learn how to tell your story, and then to do all the hard work of putting it out there, readers are treated to an amazing (and in some ways gut wrenching) view of what it was like to grow up in that place and time.

My article about Sandy Hanna’s memoir Ignorance of Bliss

Click here. for links to other posts about memoir reading and writing.